A New Deal for Quilts is also a book manuscript in process. While you can’t read it yet, hopefully it will be on your coffee table or book shelf soon. 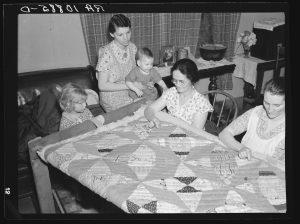 During the New Deal—the Roosevelt administration’s legislative response to the Depression—not only did quiltmakers create quilts on both an individual and collective level in response to the unemployment, displacement, and recovery efforts in the U.S., the government drew on the symbolic heft of quilts and quiltmaking in its relief and rebuilding projects. The federal government used quilts to communicate about its programs assisting the impoverished and values and behaviors individuals and families should employ to lift their families out of dire straits. I assert that federal programs—including the Farm Security Administration, the Works Progress Administration, the National Youth Administration, the Federal Arts Program, and the Tennessee Valley Authority—embraced quilts to demonstrate the efficacy of these programs, show women how they could contribute to their families’ betterment, and generate empathy for the plight of displaced and impoverished Americans.

Both the government and American quiltmakers symbolically drew on myths of colonial-era fortitude and self-sufficiency as a means of overcoming poverty. Quiltmakers during this era used quilts to express their frustrations with the downturn and to feel empowered, despite precarious financial positions. These ideas stemmed from the nostalgia-fueled Colonial Revival of the late 19th and early 20th centuries, which celebrated a romanticized version of the experiences of colonial-era Americans, while altering the values with which Americans tried to live, as many looked longingly to the imagined simplicity of the pre-industrial past despite the rapidly modernizing society.

“The whole country is quilt conscious.” 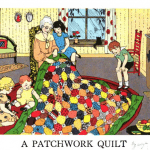 By the time the Roosevelt Administration began combatting the Great Depression, the quilt had become an emblem of how to lift one’s family out of poverty, piece by piece. Quilts had acquired this symbolic heft over the previous century, when Americans developed and perpetuated ideas about why women made quilts and what these objects meant. By the 1930s many Americans were looking longingly back to the colonial era, in search of the frugality and values that allowed Americans during earlier challenging times to persevere. These ideas stemmed from the nostalgia-fueled Colonial Revival of the late 19th and early 20th centuries, which celebrated a romanticized version of colonial American life. For quilters, this was double inspiration—they could adapt the fashion of colonial style quilts while also adopting their perceived frugality. And for those of limited economic means, such thrift—even if inspired by romantic ideas of quiltmaking—made good sense. The ideals of colonial quilts that permeated mainstream society from the late 19th century through the 1930s were in fact imagined ones, reinforced with magazines and newspapers alike offering quilt patterns inspired by old-fashioned designs and companies sponsoring quiltmaking competitions. 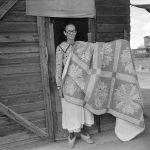 Because quilts had a widely understood meaning within American society during the 1930s, it is no surprise that the federal government used them to communicate the ideals and values of the New Deal to Americans. Through its Farm Security Administration photography program, the Roosevelt Administration aimed to publicize to middle class Americans the positive impacts of New Deal programs. Professional photographers captured pictures of migrant families, small town Americans persevering amid the economic downturn, and the benefits of governmental programs in action. Among these photos are many featuring women—and sometimes men—posing with quilts or in the midst of quiltmaking. These photographs showed how women could contribute to their families’ betterment by drawing on nostalgic myths of colonial era thrift; representing community aspects of quiltmaking and how they aligned with the communally-minded agenda of the FSA; and suggested ways of making do and being self-sufficient as a means of overcoming poverty. Further, quilts in these photographs domesticated makeshift and transitional housing, symbolically connecting the contemporary realities of the Great Depression to earlier, simpler times, during which “home” felt more stable. 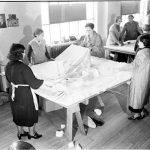 During the Great Depression, many women sought employment as primary breadwinners. Works Progress Administration (WPA) sewing rooms employed hundreds of thousands of women around the country, including many African American, immigrant, and illiterate women, some of whom helped quilts that were used in relief projects, created for hospitals, orphanages, or other state institutions, or given as gifts to elected officials. Other federal projects supplied surplus commodity cotton, that was reworked to make quilts, comforters, and mattresses. Although many WPA sewing rooms functioned as sweat shops with industrialized sewing machines, those that produced quilts felt more like imagined quilting bees of the past. Some FSA farm communities and migrant worker camps also had sewing rooms where women met to work communally on quilts. Further, FSA home supervisors gave sewing lessons for sewing machines acquired with federal loans, tips on repurposing feedsacks, and other domestic advice to FSA families receiving federal credit. National Youth Administration provided home economics instructors to train girls in domestic arts including quiltmaking. 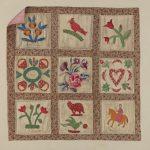 Out of work writers, artists, and other professionals found work in federal projects designed to document the past as a way of providing solace and inspiration in the present by looking to pre-industrial models of how to overcome hardships. The Index of American Design (IAD), part of the WPA’s Federal Art Project, employed artists to document traditional American arts with the aim of creating a record of American design that contemporary artists could draw upon. By the 1930s quilts were considered among the most quintessential of American objects, and the resulting IAD collection includes over 350 paintings of historical quilts.  The WPA also sponsored the Federal Writers Project, which conducted interviews with African Americans who had grown up during slavery. It also collected WPA Life Histories, which documented the lives and traditional practices of Americans. Both sub-projects include interviews with women who recount quiltmaking. Looking to quilts as old-fashioned inspiration for “making do,” one geographic district of the Museum Extension Project, part of Pennsylvania’s WPA, created screenprinted quilt patterns based on historic quilts. 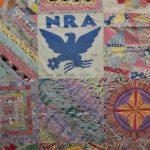 Americans made tens of thousands of quilts during the Great Depression. While many are scrap quilts exhibiting signs of making do, and others use commercially available patterns inspired by the Colonial Revival, some makers constructed quilts with overt political messages, promoting New Deal programs, celebrating electoral victories, and depicting the Roosevelts. Quiltmakers crafted blue eagle National Recovery Act quilts, various Works Progress Administration quilts, and other quilts that demonstrated their allegiance to various New Deal programs. Another group of women, part of the auxiliary group of wives associated with the Tennessee Valley Authority project in Muscle Shoals, Alabama, created a series of quilts and appliquéd panels as part of a home beautification project. But the quilts did much more than beautify: they expressed African American empowerment–literally with a black fist holding a lightening bolt, as well as through other images depicting African American men working as part of the TVA project. These, and other group quilting efforts, resulted in quilts that allowed their makers to express pride, frustrations, and hope for the future. This chapter also investigates why Americans sent quilts to the Roosevelts and other elected officials in gratitude for their efforts in combating the Depression. 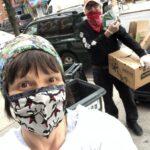 Repeatedly we hear that the current economic collapse resulting from the Covid-19 Pandemic is the worst financial crisis since the Great Depression, with unemployment reaching the heights of the 1930s during a mere several month period in Spring 2020. As during the Great Depression, the federal government intervened. While this story is just in its beginning, it is already apparent that quiltmakers are again responding to the crisis. With quilters making masks, supporting essential workers, and crafting quilts in response to today’s situation, it’s worth examining the ways these practices compare to those carried out my quiltmakers during the New Deal era. Equally worthy of examination is the government’s response. The New Deal coalition that began in the midst of economic crisis shaped our federal government throughout much of the 20th century, but today’s governmental response differs significantly. What is the role that crafts can play in the governmental response? How might quilts and the values that undergird them affect a pending Green New Deal? What can we learn from the Great Depression? Historians are not so good at predicting the future, but here I critically exam recent actions on the part of quiltmakers and the government and propose ways that they can work together to respond to current needs.