Woman who has not yet found a place to move out of the Hinesville Army camp area working on a quilt in her smokehouse. Near Hinesville, Georgia

Jack Delano captured perhaps one of the most beautiful shots of a woman at work on her quilt, this image of an African American woman. While many migrant farmers were displaced and resettled due to the dust bowl and economic collapse, families near Hinesville living in three villages, Clyde, Taylors Creek, and Willie, were displaced when in 1940 the federal government acquired land to create Fort Stewart, constructed by the Civilian Conservation Corps, during the build-up to the United States’ entry into World War 2. According to a Department of Agriculture estimate, more than 1,500 families were displaced by the camp’s construction, many likely African Americans like this woman quilting in her smokehouse. Once again, using deliberate composition—meat hanging on hooks, a stoic, dignified expression, the photo showcases American resiliency in the face of adversity. Keep in mind, this is Jim Crow Georgia. Many of the FSA photographers photographed African Americans who were not merely suffering from the Great Depression, but also from severe discrimination and persecution, presenting them with dignity and grace, even when the government had done little to integrate society or counter the injustices African Americans faced—including displacement by the building of Fort Stewart.

Framing the woman in the open doorway of her smokehouse, Delano presents her as confined by her circumstances. Yet just as the use of quilts in temporary shelters domesticated them, here too the quilt in its frame emphasizes that this is the woman’s home, and that like many women before her, stretching all the way to the colonial era, she made do by piecing together scraps to create a utilitarian bedcover. A close look at the quilt, however, reveals a more complicated narrative.

The smokehouse quilter is stitching a pattern often known as a Baptist Fan into what appears to be a printed patchwork cloth, factory-produced yardage designed to look like a pieced quilt. A conversation I had with the great quilt historian Barbara Brackman in November 2019 clued me in to this detail. The telltale signs of “cheater cloth” are the lack of lines from seams, the consistency in the arrangement of the ‘printed’ triangles (in marked contrast to the many scrap quilts in other FSA photograph which are typical of the 1930s), and the precise points where each triangle meets another. This is not recycled fabric squares, but rather is new yardage printed to look like an intricately pieced quilt. “Cheater cloth,” as it is commonly known today, was a popular means of creating the appearance of patchwork without any of the work. At first glance, the printed patchwork cloth does not make much sense in these circumstances, as the woman waiting for a new home probably did not have the expendable income to buy several yards worth of new fabric for the purpose of making a quilt, although such yardage was available in the Sears catalog. A yard of cotton sold from Sears for 8 or 9 cents a yard. The photo also prompts the questions: Did Delano recognize that this was not the kind of frugal quilt depicted in so many other photographs? And why was this woman quilting in a smokehouse, not a practice otherwise documented in quilt history? There is no explicit reason to believe Delano staged this photograph, and a quilt frame with cheater cloth would be an unreasonable prop for him to add to a composition. Quilt historian Barbara Brackman hypothesizes that instead of making do by piecing together bits and pieces to make a traditional quilt, the cheater cloth suggests that the woman in the photo may be making a quilt for the consumer market, participating in the quilt industry in order to earn income.

Delano’s agenda of humanizing and raising awareness of African American migrants was well documented, and the photo along with its caption, “Woman who has not yet found a place to move out of the Hinesville Army camp area working on a quilt in her smokehouse. Near Hinesville, Georgia” suggests that this composition was designed explicitly for viewers to contemplate the meaning of home amid upheaval. He may not have noticed or cared that she used printed patchwork, ignoring the possibility that she may have been making a quilt for sale.

Excerpted from manuscript, A New Deal for Quilts, forthcoming by Janneken Smucker 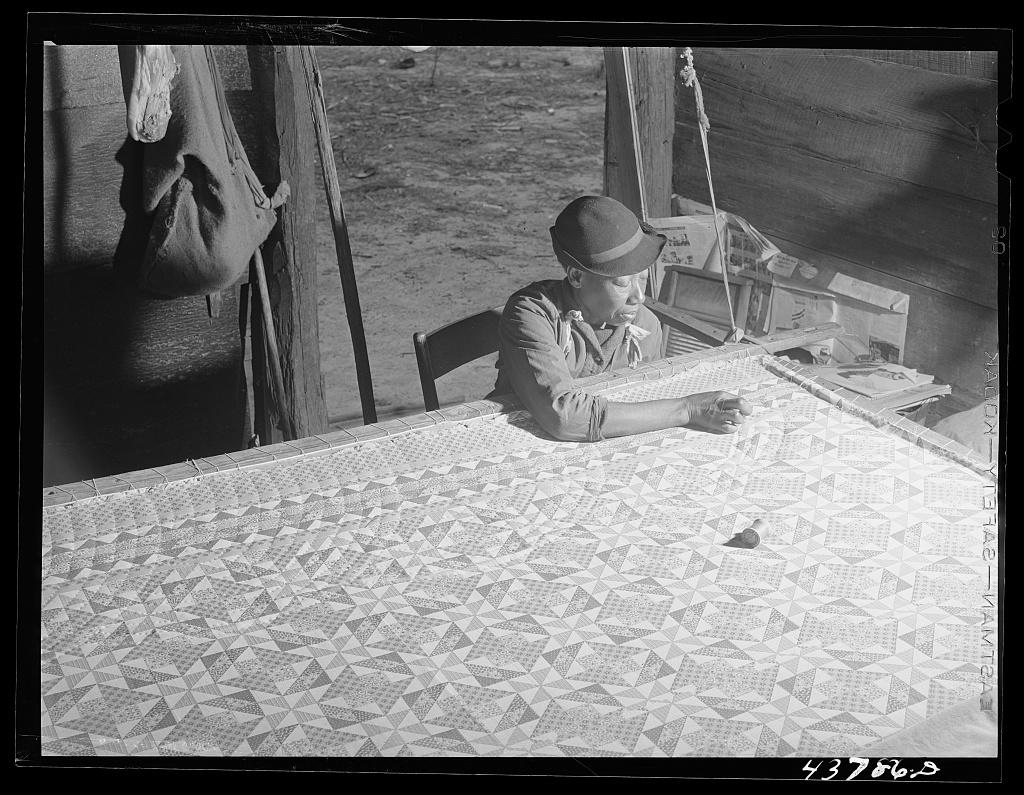 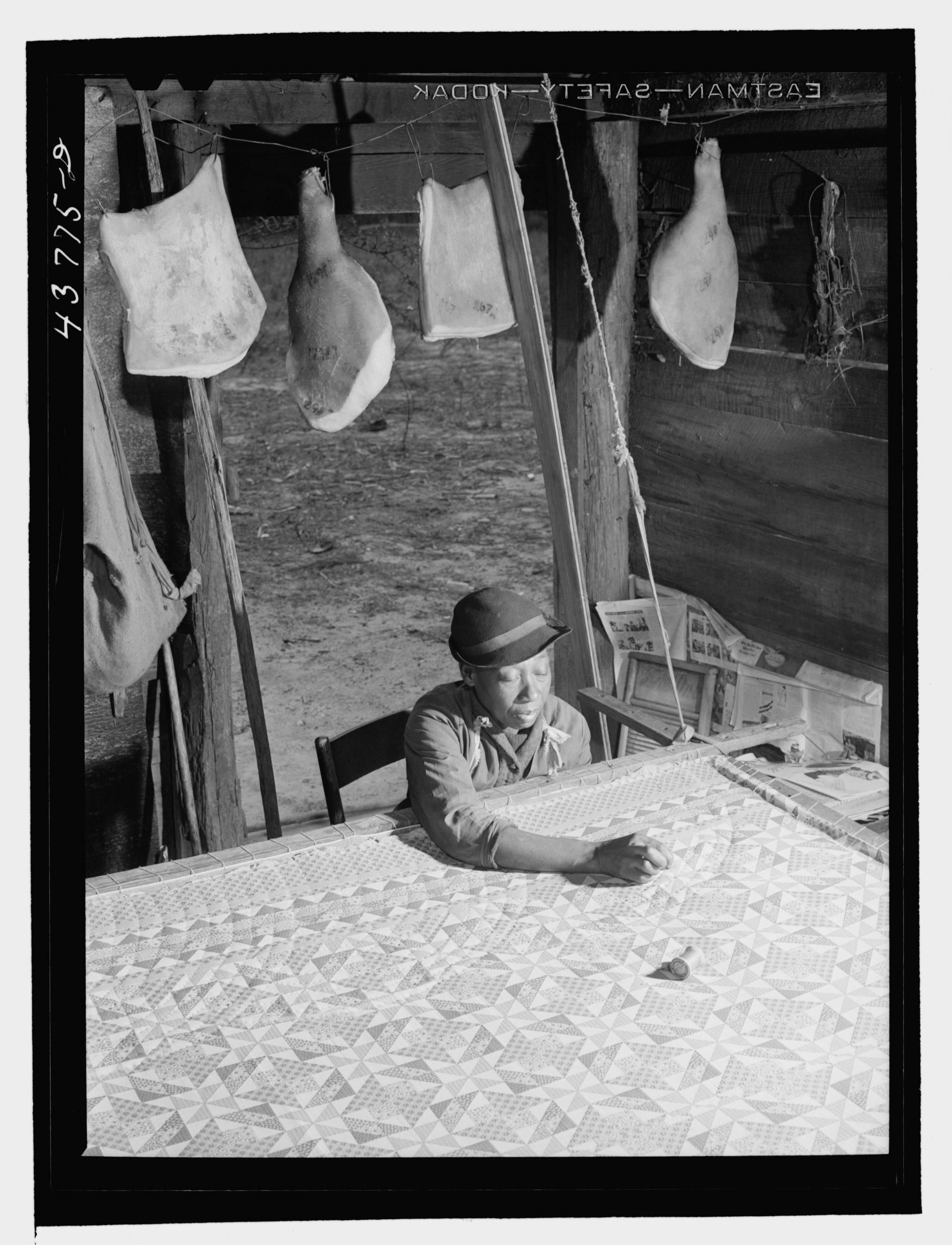